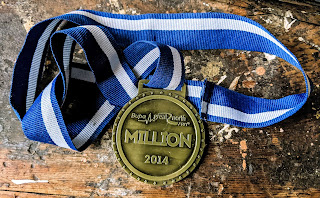 Today's photo is of an item that every time I look at it I feel again some of the feelings I felt at the end of the Great North Run in 2014.

I've never been sporty, in fact I have always had a tendency to avoid it. Probably one of those issues that I have an unconscious chip on my shoulder about. As a child I was very clumsy and uncoordinated so sports were difficult and therefore avoided.

But, I have always thought that it's never good to allow the things that scare you or that you find difficult to prevent you from trying to achieve something. Maybe I'm just stubborn.

The backdrop to to my involvement in the Great North Run that year was that some close friends were in the process of raising a huge amount of money for the RNLI. The friends I’m talking about are serious runners and have been very successful in taking part in many different events including the London marathon & have raised a lot of money in the process over the years.

I began thinking that I really should try in some small way to contribute to the cause, and I did so by being as supportive as I could within my innate aversion to sport. But then I started thinking that my own attitude to sport needed to be challenged, so I decided to participate for one year only in the great North run.

As I’ve said many times before this revelation occurred during a drunken night in the pub. I’m not certain that my friends took my promise to take part particularly seriously. But I did.

I hated every minute of training, but I committed myself to it. I did not complete The Great North run in an impressive time, but I did complete it. Also I managed with the help of my friends to raise a respectable amount of money for charity at the time.

We all have many things in life that we achieve & are proud of, but this is one of the achievements that I look back on with a strong sense of satisfaction, because I did it knowing it would be difficult. Knowing that in doing so I would be confronting many demons from my childhood. I knew this but I did it anyway.

I did sports day, and now I don’t have to anymore.