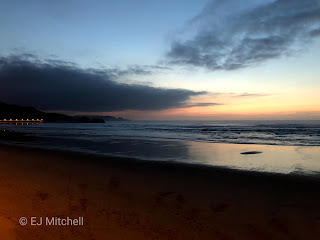 So in episode 6 I was whining a little bit about how terrible my life as a travelling sales rep is at times. Mostly because I don't get much time to look around and smell the roses. Which you'll be surprised to hear no one had any sympathy with in any way.

The truth is that while yes things are often busy in the travel department I do get to see a lot of nice places, usually quite briefly.

Anyone who has been within earshot and has heard me bleating about my travels will be used to the fact that when I mentioned northern Spain I often spend quite a long time telling you how much I like the place and all of the reasons why.

It has been mostly the case over the last 20-years that in a business sense I tend to go to places where there are large steelworks to sell welding related stuff to them for reasons that are entirely boring.

However, I quickly discovered that the bit of northern Spain between The Basque country and Asturias is incredibly beautiful and it was always a pleasure to drive through. Inevitably I would be flying into Bilbao and then driving along the northern coast of Spain to Aviles.

The north of Spain is the more industrial part of the country particularly the areas around Bilbao. But once you get away from the busy roads of Bilbao and head along the A8 Autovía del Cantábrico you are quickly treated to 3 hours of beautiful coast and mountains as you drive along a relatively quiet motorway.

For those in the know, think of a longer Antrim coast road, crossed with the M6 toll, except it's mostly free.

Anyone who knows me also will know how how important service areas are to me in my many travels. And will know that wherever I travel in the UK I have favourite place to pick up coffee.

Ruth Jones and James Corden picked up on this phenomenon in one of the episodes of Gavin and Stacey. Where the cast were comparing the benefits and drawbacks of some of the service stations on the M4. For future reference - I am Membury or Reading, never Chieveley.

It's worth noting that Spanish service stations while they look more simple in comparison to the ones we see on our motorways, the coffee and food on offer is generally of much better quality and a much better price.

The coffee is well worth writing a separate post about, which I probably won't.

So, today's picture was taken at the Playa de Salinas, near Aviles Asturias. On one of those occasions where I had arrived earlier than normal and had an evening to look around a little.

This beach reminded me of the beach that is just at the end of my road in Gorleston, in that it was a place where largely local people lived and visited. It wasn't developed in anyway really for tourists. It was just a beautiful beach that the people live next to and enjoy.

While I was there I was treated to this beautiful sunset & just for a change I haven't mucked about too much with it in applying effects.

If you ever have the chance go to Northern Spain & grab a pintxo to go with your coffee.