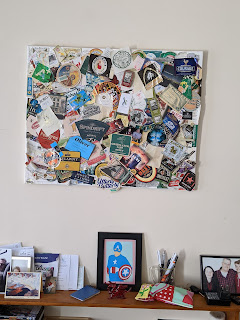 Ok so having been told off by my Mother for two Blogs in a row, I thought I should move to safer ground in subject terms. Today’s item is a Collage that is currently hanging in my Living Room.

It's called "A Few Good Nights"

It is literally the product of the time a few years ago, when my house for a while became the place where my friends would congregate. Mostly because a few of us had kids of a similar age & consequently had little time or money to go to somewhere as exotic as a pub very often. You never realise how rich you were, until you have kids.

Being the crowd that we were, there was always something new someone had found for us all to try, it became a bit of a voyage of discovery at times.

We got into the habit of sticking the labels of a beer we enjoyed, or even a whiskey that we thought was fowl, both worthy of a place because they were enjoyed or laughed about at the time. The wrapper of the Cuban Cigar I shared with Phil, along with the label of the bottle of Bourbon that strangely evaporated at the same time. There are even labels from jars of various pickled vegetables.

Each was put there, because it was particularly enjoyed at that moment by the person that stuck it there. There are more moments than I can recall now, but each is a moment captured.

A couple of years ago I decided to take it down, in favour of another picture. Thinking that neither of my now adult kids were that fond of it, or bothered if it was there or not. Within hours of it being moved though, my younger son had unceremoniously swapped the pictures around again.

Says it all really & I took the point. These were all occasions we shared with our friends. They were the best sort of nights, the spontaneous ones, those impromptu moments where you just share what you have. There always seems to be enough to go around.

There were not a few good nights, there were lots of good nights. We are all missing these kinds of nights at the moment. It’s an odd time for all of us. So it is a good time to look at the collage we all made & to remind myself that there have been good times and there will be again.

There will be lots more good nights.
Stuff