Adulting 1 - Remember, No-one actually knows what they are doing: 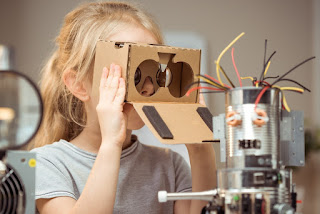 One of the results of writing this kind of self-absorbed nonsense on a regular basis is that you do start to remember things from the past. And if you're anything like me you then start to reconsider them.

That's me all over you see I overthink things. It's probably a feature of everyone's life that we gnaw at the past even though we were different people then, can change none of it & wouldn't be the people we are without it.

The occasion I remember is one of those schoolyard conversations between 7 year olds. It was the “What are you going to do when you grow up?” conversation.

Amongst the group that were there were the typical answers "I'm going to be a footballer, policeman, soldier, doctor & train driver".

I don't know why I said what I said it was probably the first thing that came into my head but I said "I'm going to build robots" Bearing in mind that this was probably around 1978 and the ZX81 didn't come out for another 3 years. I was understandably laughed at for many days for saying such a stupid thing.

Robots were from the telly, they were a future fantasy, very rarely benign, sometimes paranoid and usually the bad guy's assistant.

Fast forward many years later to the realisation I had recently. While it's true that I have never in fact built a robot. I have spent the best part of the last 20-years in my professional career selling and project managing process automation for the welding industry which increasingly these days is using AI.

In one of my previous posts I celebrated the positive effects of the mad idea in the pub (Places 8 - Malin Head, Inishowen, Co Donegal, Ireland).  A very positive thing happened at that point because of a mad idea that we all followed through on.

So while I'm not in a laboratory wearing a white coat bolting robots together at least part of that silly statement has come true. Furthermore it's been an important part of my career to this point.

I'm only in touch with two people from that time in my life. I can't remember when either of them had chosen to pursue as a career at that point.  Given that as a 48 year old, I still don’t know now, this is probably not a big surprise.

In that sense the liberating thought for me recently has been to remember that no-one actually knows what they are doing, it’s everyone’s first go at this.

So build the robot, or chase the unicorns, but always dream the dream and chase the Butterflies.

Who knows how these things really get started? The finger of blame can be pointed in several directions i'll save your blushes (Paul, Scott, and Trace)  The truth is like many things it started as a joke that became a theme and suddenly before you know it you have 'Guess The Stain' and Shitty Badges. We have all missed a lot over the last year. For me I haven't worked in any way near normal, I've been cloistered in the same way as many other people. In normal times I travel frequently with my job, all over the UK and Europe, but now I'm ensconced in my old man chair next to the radiator. It has always been the comfortable spot in our house.  Where thoughts are thought, reports written, stories told knees bandaged and hearts mended. Not my normal thing.  I've done a good line in being a weekend father over the years, something I'm at ease with now and I've made peace with. My boys, grown now understand this and they've asked their questions and
Read more

Adulting 8: The Joys of Domestic Technology.

I bought a new bin.  Not the most interesting of introductions to our blog conversation & not before time according to my Mother, but there it is. Every time, I walk past the bloody thing the lid flies open. It's one of the automated ones you see, all you need to do is walk past it & the lid flies open. I bought this bloody thing because I had  hoped it would help me to finally gain at least the impression of control of  the chaos that is my kitchen. In reality all that has  happened is that it has introduced another new form of anarchy that I am not ready for.   The opening and closing of the bin lid happens in a way that I don't understand and have no control of.  All I need to do is walk past it in the vaguest way and the lid flies open in a very random & aggressive fashion reminiscent of the till in Arkwright's Store. I am reasonably certain that my younger son finds this hilarious as he breezes through the house lively and in full control of all the technol
Read more

Adulting 4: The inherent problems of A La Carte History.

Apparently, a good tale grows with the telling; this is especially true of me with my memories.  After all I do love a good story. One of my favourites is the tale I tell, when I explain to people how I met my oldest friend.  It is a good story and it contains the kind of elements that would illicit the response I tend to be looking for.   The first walk to the new school, the nervousness of being the new kid in class, the discomfort of new school clothes, meeting my new teacher, an argument with the annoying kid in class, who quickly became my best friend.    It is a nice whimsical story, but these days, if I am honest I have no idea if its true or not. This is because I was seven at the time & I have altered it many times since over the years.   I suspect Chris does not know either, but I know that his version of events will differ from mine.   It is well known that our memories are not particularly good.   The truth is, we all do this kind of thing with our memories quite a lot,
Read more