Place 2: The Quayside, Newcastle Upon Tyne: 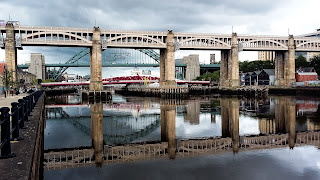 Place number 2 takes us much further north to Newcastle. This is a place that I have visited many times over the years for a range of different reasons.

Mainly it has been with friends of mine who have the habit of competing in the Great North Run, meaning that I would invariably tag along to hold bags, take photos and join in the post race drinks in the beer tent.

Newcastle for me is one of the best places in the UK to visit, the architecture alone makes the visit well worthwhile. The quayside along the Tyne, with its four iconic bridges is a wonderful vibrant area of the city where there are are at least 4 restaurants that I absolutely adore.

Don't get me wrong I'm not a food snob by any means, these are just places that are special for me because they just do what they do very well.

Newcastle for me is a place that whenever I have visited it I have never failed to have a good time. The parallels with South Wales really are there are to be experienced the open and friendly nature of the people is never lost on me
Places
Location: Newcastle upon Tyne, UK