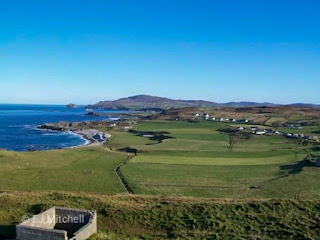 Today's photo takes us back to October 2009 and is in its own way a tribute to the positive power of the mad idea in the pub.

My friend Phil and another friend went to the pub one night during the summer of 2009 and in a moment of genius that has got lost in the passing of years and the alcohol infused mist that was produced at the time. We somehow agreed to take part in a Banger Rally where we had to circumnavigate the island of Ireland in a car that cost less than £100.

The actual event started in Belfast within sight of the Harland and Wolffe cranes and finished 4 days later in Kinsale, County Cork.

The picture itself is noteworthy for two reasons. Firstly it is the only day in the whole of our time in Ireland that there was a sun in the sky. Secondly it was the only day during the trip that our token American was allowed to drive the car. This was mainly due to our own incompetence in sorting out insurance at the time but has been laughed about on many occasions since.

In the picture is the coastline of the north of Ireland in County Donegal at a place called Malin Head near Inishowen, it is famous for being the most northerly point of mainland Ireland and like all of Donegal is stunning in its beauty.

During that trip we discovered between the three of us just what a magnificent place Ireland is. The further west you go in Ireland the better and more mad it is in the best possible way. You can run out of ways to describe how beautiful the landscape is there and at the time we all three of us stopped trying to find the words and were literally just pointing without saying a thing because we all knew what we meant. There were just too many beautiful places for words.

And we found the best place ever that weekend, in my opinion to have Seafood Chowder. in a village that I can never remember the name of, overlooking the sea. Where we sat and had lunch and shared a Guinness with the man that had caught the fish that morning.

Pictures and music I think are very similar in that you can see a photo and be instantly transported back to that moment. For the briefest time you're back in that place. The same is true with music there is always that certain song that when you hear it you're instantly back where you first heard it.

It just goes to show that sometimes you can never underestimate the positive power of the mad idea in the pub.

Perhaps that's what we lose sight of at times especially as we get older. In my own melancholy way at the moment I suppose at times I'm mourning the potential for spontaneity that's missing from life at the moment.

In a way my worry is that when we get back to what will pass for normal that we will become more risk averse and more insular because we've become more frightened.

I would rather go back to being as outward-looking and excited as I was that weekend with my two friends gadding about in Ireland and loving it.

So this is my love letter to the mad idea in the pub.
Places
Location: Inishowen, Malin Head, Co. Donegal, Ireland