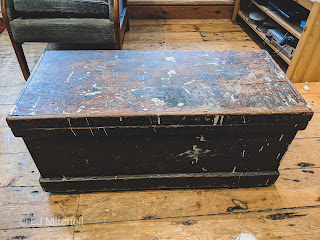 Ok so I've had a few days away from bombarding you with my sentimental nonsense. In the absence of thinking of anything better I thought I would write a short series based on some of my favourite stuff.

I am not going to be so shallow as to say that any of the items that I show are more preferable than any of the others or even have much physical value. But they are all irreplaceable to me.

Today's item is my Grandfather's toolbox. From my earliest childhood memory it sat in the corner of his workshed in the garden of the mid-terraced house in Manselton, Swansea, that he shared with my Grandmother.

My Grandfather was born to a poor family in Hampshire. I don't actually know much about his childhood, but I do know that as a young man he enlisted in the army probably because he had little other option. He joined the Dorsetshire Regiment. He remained proud all his life of his membership and association with that regiment. He spent perhaps the happiest years of his life prior to the war with his regiment in India.

In a familiar romantic story my grandparents had maintained a relationship via letters for several years while he had been in India and upon arriving back in England and after at least six years of separation they met at Aldershot Registry Office and got married. This was 1939, so he was almost immediately called back up to service for the duration of World war II.

Like many people of his generation my Grandfather never spoke of his war service, mostly I think because he wanted to protect us from it. I think between us as a family we have picked up a few stories, but not many. And in recent years we have discovered his war writings, which shed a bit more light on his sufferings as a POW.

We talk of Dunkirk as as a great military achievement, which in its way it was. But my Grandfather for strategic reasons was left behind and spent the rest of the duration of war in captivity.

When he arrived back in the UK and was reunited with my Grandmother, he retrained as a carpenter. So having served his country in the Army for so many years he then helped to rebuild his country after the war.

Like many people of his generation my grandfather came back forever altered. I suppose I always feel sad that we really never knew the man that left home for war, we only met the man who survived damaged and changed by it.

For me the great heroism that my grandfather and his generation showed is that he not only did his duty in the some of the darkest days of our history. He also rolled up his sleeves afterwards, learned a new trade and helped rebuild the country.

This Toolbox was one of the things he made during his Carpentry Training and he used it throughout his career.

The chest itself is battered in places, it has paint marks on it and scars from the many years of use. These days it tends to contain my shoes and some other assorted nic-nacs rather than tools.

As kids we would sometimes sit on it while Grampa pottered in his shed. Sometimes there would be a story, usually Rudyard Kipling & there were sweets that my parents pretended not to know about.

The Toolbox arrived with me because my Mother and my Aunt both had the opinion that of all his grandchildren I would perhaps appreciate it the most. I don't actually know whether this is true or not, but I do know that I love it.