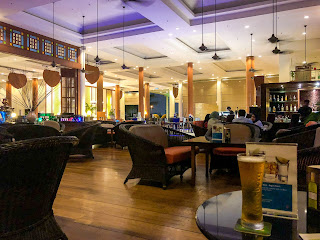 When I have posted photos in the past that I've taken in Malaysia I have tended to pick a different one from this. Even though it's from the same room, in the same hotel as the one pictured.

The usual picture is a favourite of mine that shows a window scene.
with some palm trees and a nice sunset.

It's a another picture that would offend my father I think, in that I have been extremely liberal with some of the post processing to bring out the sunset that is involved. I may come back to that photo at some point.

But while I was thinking about which photo to post. This one leapt out, because it reminded me of a part of the lifestyle of being a travelling salesman or a travelling anything that becomes important in the routine journeys.

So you can end up leading quite a solitary life because you don't want to end up talking to another sad sales rep like yourself. Making small talk instead of proper talk.

So when I arrive in a place that gives me a feeling of calm and somewhere pleasant to sit it's a real bonus before I even look at the menu. Sometimes you can meet really interesting people under such circumstances.

This hotel was one of them and it's a nice one. I spent two blocks of a week at a time in this hotel and unusually was able to relax both times. It made such a big difference at the time.

I will remember some great night's with my friend Johnny Tremayne, sitting in this lounge bar and just talking crap and our shared love of music and comics. Also being able to explore some local bars and restaurants in good company. It sticks in your mind when something like this happens because it's rare.

It's not an especially interesting photo I suppose, but in choosing today's picture I wanted to show something different from the standard seaside view or pretty picture of a building I will probably show most of the time.

I wanted to show a place where if only for a short time I had a place where I could properly relax at a time in my life when when it was extremely busy.

I suppose in our lives at the moment, these are the moments we are all missing & are treasuring all the more as a result.

Sometimes, it's just about having a pleasant place to sit and good people to talk to.
Places
Location: 1, Jalan Usahawan U1/8, Seksyen U1, 40250 Shah Alam, Selangor, Malaysia