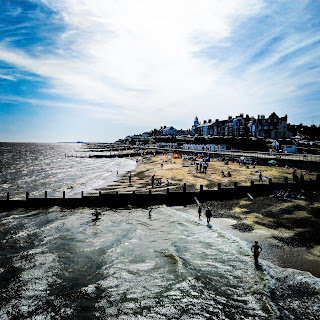 OK, so here's the thing, today's choice in some ways could be considered controversial. In the sense that Southwold in recent years has become a parody of itself.

It has started to believe its own hype & has become posh London on sea. The stereotype posh English seaside town, where the big brands have been encouraged to keep a low profile, even though they are really there.

Punch and Judy are on the prom and posh delicatessen pies are extortionately priced in High Street.

There are the arguments that local people have been pushed out, as has happened in many other parts of the UK, Pembrokeshire, Cornwall, Dorset, Devon, Gower and North Norfolk all being obvious examples. But it's ok it turns out that the Londoners like Adnams.

Now despite all this Southwold has a particular resonance for me. Anyone in the know will immediately pick up on it. The Kev, Harry, Jeremy & I did The Random Show for two and a half years from Southwold and we love the place.

But having lived on the east coast of England for as long as I have my love of Southwold goes deeper than that. It's been the place that has been a day trip for my children for as long as I can remember. My parents when they visit have it pencilled in that we will go to Southwold to have lunch at the Nelson. My Father has at least two galleries there that he likes to wander around. Because it always has something interesting for him to see.

Today's picture is taken from one of my favourite places to stand, on the pier in Southwold, with it's memorial plaques, facing South along the coast. Southwold is pictured on the right with it's famous lighthouse.

Because I enjoy it so much I've mucked about in post, primarily to annoy my Father. But he can't argue with the view from the pier along this stretch of Suffolk coastline, it's tremendous.

And it always makes me want to return.
Places
Location: Southwold, UK